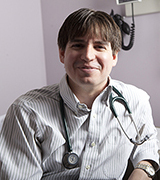 Between 1995 and 2003, Dr. Michael Green was a physician and Chief of Staff at a small hospital in Moose Factory, Ontario. The issues and challenges he encountered working in the remote First Nations community cultivated an interest in research and broader health-system issues. That interest eventually led Green to Johns Hopkins University, where he earned his Masters in Health Policy and Management.

In 2004, Green landed at Queen’s, where today he’s an active physician with a 600-patient roster and an associate professor in the Departments of Family Medicine and also Public Health Sciences. He’s also Director of the Queen’s Centre of Health Resources and Policy Research. As part of the latter role he’s currently involved with two major research projects that hearken back to his previous work in northern Ontario.